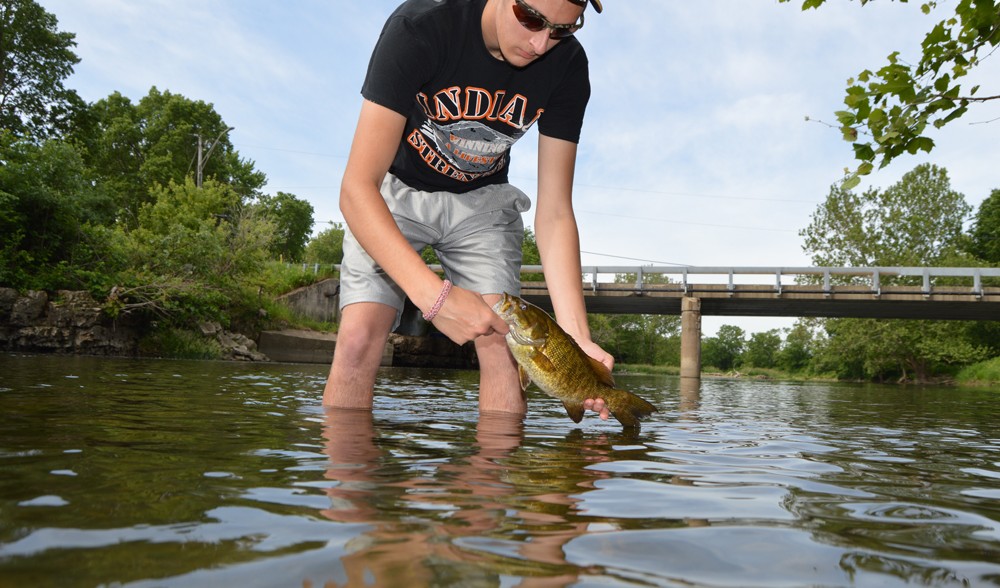 As my line tightened and the rod began to bend, I felt the pole load up with a good fish on the other end of the line. Seconds later, a 3-pound bronze bullet exploded from the water trying to shake the lure. After a few minutes, I landed a beautiful smallmouth bass on abright sunny morning. No, this is not taking place in the Northwoods, but right here in the DuPage River.

The DuPage River is one of the most overlooked smallmouth bass fisheries in Northern Illinois. Although there are not as many deep portions as the Fox River or Kankakee, nor as popular, there are still plenty of places that hold smallies. I grew up fishing the DuPage river from North of Plainfield to Minooka. And trust me, there are plenty of channels that hold fish. Overall the DuPage spans close to 84 miles. That’s a LOT of water to fish. But that is part of the appeal of small river fishing — the adventure. Fishermen get a chance to hit the river and walk up or downstream in search of holes and channels. You could fish that river every day for three months and still not cover all of it. And when rainfall changes the water level, it adds yet another variable to the challenge.

The “Dirty Dupe”
40 or more years ago, The DuPage was considered unfishable. It was rumored to be a dumping ground for industrial and radioactive waste between 1945 and 1963, before industrial waste disposal was regulated. But since enforcement and ultimate reduction of industrial dumping practices, The DuPage river ecosystem has continued to stabilize over the years, becoming a fantastic smallmouth fishery. In addition to cleaner water, one key to their success is the abundance of crawfish — a primary food source for smallmouth bass. With food and clean water, the smallmouth began to make a comeback. Another feature that makes the DuPage a great home to smallmouth is the lack of competition is another factor that allows smallmouth bass to flourish in the DuPage River. Without huge volumes of baitfish in the system, larger predator fish like pike, musky and even largemouth bass are not as prevalent.

A Recreational Waterway
There was a time when I could fish a stretch of the DuPage River all day and not see another person. However, with urban sprawl comes recreation-seekers, and the DuPage River provides just that. It has become a very popular waterway for kayakers as well as inner-tubers just floating in water to cool off on a summer day. Nonetheless, the smallmouth are present and thriving. I like to fish early in the morning before the river gets busy. I also prefer remote stretches of water. Like most public-access hunting or fishing, the farther away from the parking lot you travel, the fewer people you will run into.

Time to Catch Some Bronzebacks
As I mentioned earlier, the DuPage has a massive abundance of crawfish, which are a primary food source for smallmouth bass. So to that point, my favorite lures are crawfish-imitation lures. There are small crankbaits by Rebel, which I use earlier in the year. Rapalas will also work on smallies early in the year, but

the crawfish crankbaits are my favorite in May and June. Unless you like cleaning moss off your lure after each cast, mid-June is the ideal time to switch from crankbaits to weedless soft plastics like the Chigger Craw, or 4″ tube jigs. Target the deeper pools and channels, working the lures in and around rock structure, and eddies from the main current. And in July, nothing beats netting real crawfish for bait — use a J-hook with splitshot and drift it in the current.

Not that smallmouth are prized for tablefare, it’s still a great practice to catch and release them. Their population is much smaller than that of their cousin the largemouth.

So if you’re looking for a “small river” experience and want to catch one of the best fighting gamefish in Illinois, give the DuPage River a shot this summer. Check out the photo gallery below!!