According to the Illinois Department of Natural Resources, the 2020 Illinois deer hunting harvest is up slightly from 2019. There are still a couple of late season firearm hunts, and archery season ends in January, but here are some preliminary numbers…

I personally noticed a decrease in the number of big bucks seen, but that doesn’t mean they’re not there. I saw a good amount of does and small bucks during firearm season, but did not see as many mature whitetails compared to last year. And most hunters I talked to noticed the same. Unseasonably warm temperatures, and plenty of standing corn are two factors that could have accounted to decreased big buck sightings. I also think that mature breeding bucks were locked down with does during the firearm seasons. In Illinois, big mature whitetails will stay with a doe in heat for up to 72 hours or until he breeds her, which decreases the amount of time he is actively searching for another doe. This decreases the chance of being seen during daylight hours. In addition, the second half of the firearm season fell on a near-full moon. And based on personal experience, I typically see fewer deer during this phase.

Stay tuned for a comprehensive breakdown of the final harvest numbers after the season. 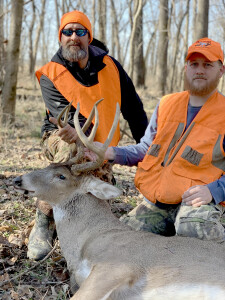