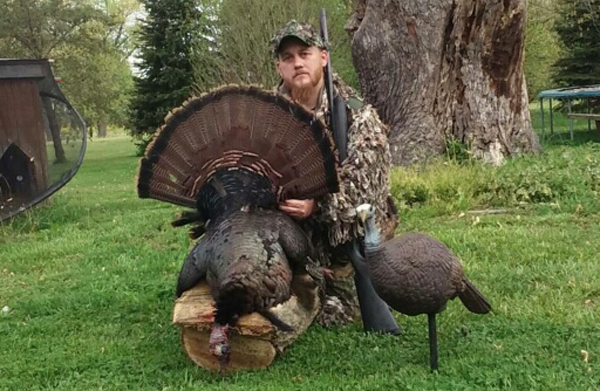 It takes dedication, stealth and most of all patience to kill a wild turkey. And that’s what Jason Hobbie demonstrated recently during the 2016 Illinois spring wild turkey season.

I love hunting wild turkey in Southern Illinois in the spring. But a cold snap gave the birds a serious case of lockjaw — they weren’t making a peep, making it tough to locate them. On the three-day hunt, my son Kyle and I only heard a few gobbles from birds on the roost, but then they quickly clammed up. On opening day, we had two hens fly off the roost and stroll into our decoy spread. We were using a new set of Red Head turkey decoys from Bass Pro Shops, but the birds didn’t know that. They milled around our blind, feeding and preening for over an hour and a half. We were pretty stoked, as nothing beats having live “decoys” in front of our blind. But no toms showed up to play. We changed gears and tried another spot later in the morning. After 20  minutes, we spotted two big toms making their way towards us. The setup was great, and the first bird was coming in on a string. The second bigger tom didn’t like the set up. At about 70 yards, he decided something wasn’t quite right

and wouldn’t come any closer. He walked off, taking the first bird with him. It was their lucky day, not ours. Some days you win, some days the turkeys win. But that’s the fun of turkey hunting, nothing is guaranteed.

But a few days later, another monster tom wasn’t so lucky. My buddy Jason Hobbie set up on some roosted birds, with his GoPro strapped to his head. A big gobbler flew off the roost and landed in range before Hobbie could get his gun up in position. That’s where the patience comes in. For close to 10 minutes the big bird strutted closer, spitting and drumming the entire time. When a tom is in full strut and turns away, that gives hunters a few seconds to move or get the gun up and in position. And that’s exactly what Hobbie did. At twelve yards, it was pretty much a done deal. Don’t believe me? Just watch the video below.

This is a textbook example of how to keep your cool, and wait for your opportunity for the shot. Good camouflage and the right set up are also critical to success. Turkeys have incredible eyesight and even the slightest movement will give you away. Ground blinds are great for turkey hunting- they give you the chance to move around a little bit, and get your gun up without being spotted. But sometimes ground blinds are cumbersome to carry in and set up. If you’re not using a ground blind, then

it helps to set up in front of a large tree that conceals your outline, so you don’t look a big camo “blob” on the ground. You also need to have clear shooting lanes. The best setup in the world isn’t any good if you have a lot of brush or trees in between you and the bird.

Lastly, turkey hunting takes patience. Wait until the bird is in range and presents a good, clear head shot. And when a bird is coming in, let him come. When he’s in range, give a couple mouth calls to get his head up, then put the bead on the middle of his neck and let him have it — squeeze off the shot, don’t jerk the trigger, and you’ll be having turkey nuggets for dinner while sharing the story with your friends.