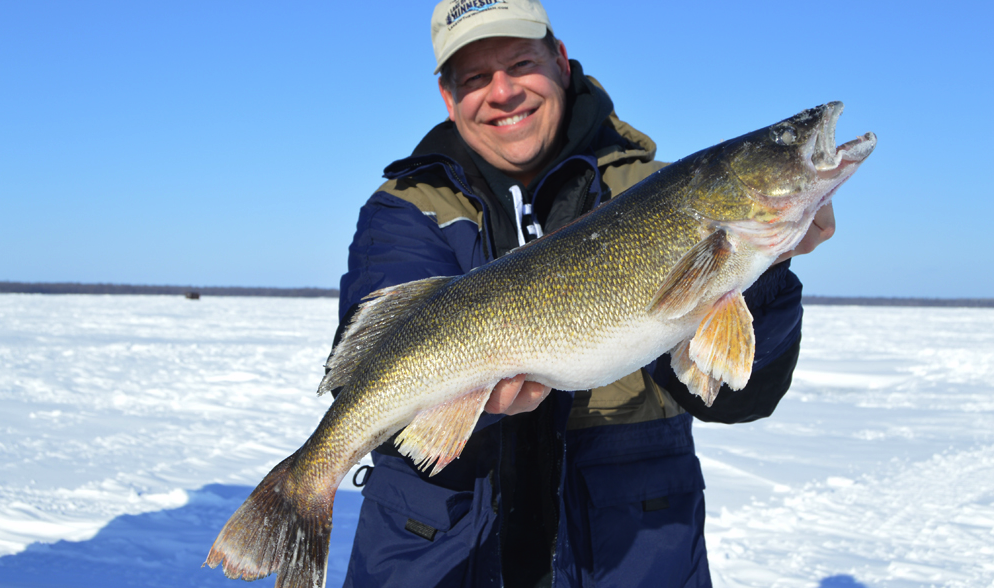 Seven months ago, I had the opportunity to fish one of the greatest walleye fisheries in the world — Lake of the Woods, Minnesota. Now, I found myself once again heading onto the lake in pursuit of keeper walleyes. But instead of a boat, I was riding in a track-driven snow machine across frozen water. Fish houses dotted the landscape like little towns camped over fertile waters teeming with hungry toothy critters. It was like nothing I had ever experienced before.

Hosted by the Lake of the Woods Tourism Bureau, I spent the first couple of days of this ice fishing adventure with a handful of other outdoor writers at the Sportsman’s Lodge. On the first morning, we chowed down a big breakfast and walked down to the bank of the Rainy River to head out onto the ice. Like a child, I was bewildered at the thought of driving 20 miles across a frozen lake. We rode out to the fishing grounds in bombardiers — customized track driven vehicles that were manufactured in the 40’s and 50’s for the purpose of comfortably transporting small groups of people across snow and ice. The heated “bomber” cruised across the lake to deliver us 10 feet from our destination for the day. I jumped out of the bomber and stepped into a toasty warm fish house with 12 holes punched through the floor waiting for us to wet some lines. It wasn’t too long before I hooked up my first fish and pulled a nice sauger through a hole in the 3-foot-thick ice. We continued to catch fish intermittently throughout the day. If the bite had slowed, our hosts from Sportsman’s would have gladly moved us to a new house, but we were doing fine. As my friend Joe Henry was showing me how to work the electronics, he hooked into what he called a “good fish”. After four drag-screaming runs it was obvious that this was more than just a good fish. When Joe finally tired it out and worked it up through the hole, I was speechless. The 11-plus pound, 31-inch giant was the biggest walleye I had ever seen, let alone seen someone catch. It looked like it had swallowed a football. It was high fives and handshakes all around. That night we celebrated at the Border View Lodge located at the mouth of the Rainy River. The Lodge faces Canada on the other side of the River (hence it’s name) and hosted us for a fabulous meal of walleye and steak. Not a bad first day.

On day two, we once again fished in the comfort of a fish house. But this time we were up in a region of Lake of the Woods called the Northwest Angle— the northernmost tip of the lower 48 states. Our guide from Sunset Lodge took us to our cozy heated home for the day, where we caught an array of fish including walleye, jumbo perch, sauger, northern pike, and tullibee. In fact, another unique aspect of ice fishing here is the variety of fish — after every hook-set, you never know what’s on the other end of your line. We used different presentations for bait, but the best seemed to be spoons tipped with a minnow head or tail on the treble hook. The small, heavy spoons enabled us to provide good action to the lure as well as punch it down through sometimes-slushy holes. The bite can be extremely light, especially with the walleyes. Most of the fish were within 2-3 feet of the bottom, so it was important to get the baits down in the strike zone. As I worked the spoon up and down off the bottom, I felt a tiny “tap”, then set the hook and my rod bent in two. Ten minutes later I pulled my biggest fish of the trip through the hole — a fat 23-inch walleye.

The last day of the adventure took yet another form. A small group of us hopped in a bomber and headed even further north to fish the Canadian waters of Lake of the Woods. Followed by a group of guys pulling their portable fish houses and gear with snowmobiles, we trekked ten miles over the border to our destination. With islands and rock structure jutting up from the frozen landscape, this new terrain was different than the wide-open vastness of Big Traverse Bay where we had fished the previous days. The temperature was well below zero, but bundled in the latest ice fishing apparel from Frabill, we had little concern for the cold and focused 100% on our quarry — giant black crappies. After firing up the ice augers and punching holes through the ice, it wasn’t long before we had rods bending in two.

I also learned the importance of the electronics that are essential to successful ice fishing—sonar flashers. By using a transducer on a cord lowered into the ice hole, the device uses sonar to read and display activity below the surface like fish, structure and baits. This proved to be a key factor in our success on crappies. By using a “hop and drop” method, we were able to stay on the schools of crappie as they moved. We drilled a bunch of holes in the ice and would then hop from hole to hole using our electronics to see if there were fish. If there were, we would fish that hole and catch a few before the school would move on. This tactic enabled us to keep moving with the fish, and ultimately bag a three-man limit of big, fat crappies. With 30 crappies in the bucket, we piled in the bomber and moved to another area where we caught a few dandy walleyes right before the sun dipped below the horizon and turned out the lights.

The entire experience was a mix of great fishing, spectacular accommodations, and friendly people in an absolutely breathtaking environment. If this sounds like your kind of adventure, start planning your trip at LakeoftheWoodsMN.com.

Or get more information on these great resorts…

Check out the awesome photo gallery: