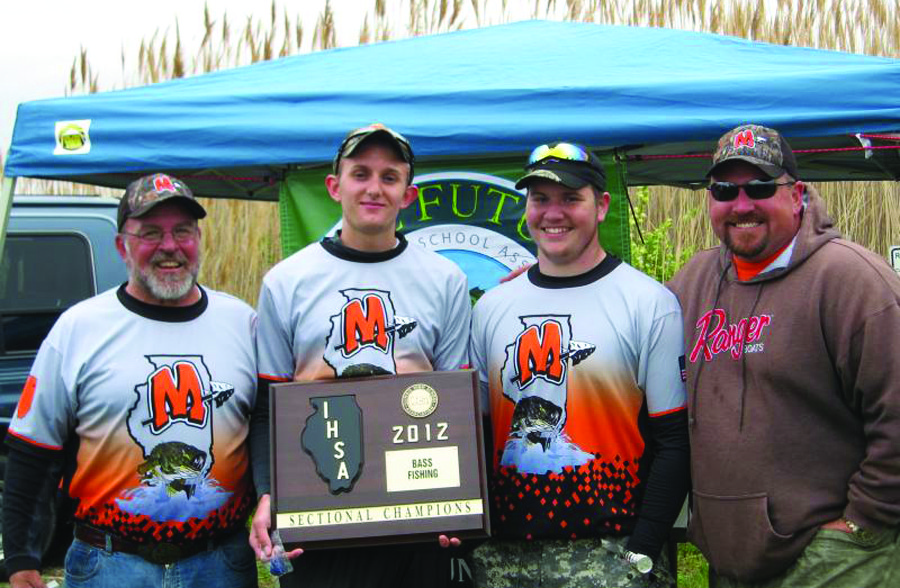 When you think of high school sports, most people think Friday night football games under the lights or nail-biting basketball games, not fishing.

But that’s beginning to change.

In 2009, the Illinois High School Association officially recognized bass fishing as a school sanctioned activity. OK, kids won’t be getting a varsity letter for fishing, but it’s a huge step forward for the sport. After all, today’s professional tournament anglers have become some of the most popular and successful celebrities in the outdoors industry.

And now, Illinois high-schoolers have the chance to fish competitively as school sanctioned teams.

One in the “Win” Column for Illinois

In a state known more for setbacks and scandals than advancements and successes, the IHSA should be applauded as Illinois is one of the first states in the country to add fishing to its roster of organized school competitions. It’s likely the national recognition of fishing as a sport played a role in the IHSA embracing bass fishing as a school activity.

But it was actually a group of teachers that served as at the catalyst to put this in motion. This group understood the values instilled through fishing and the outdoors, and brought the concept of high school fishing to the IHSA for consideration. And in 2009, the first official school fishing clubs were formed.

Bass fishing is considered an “activity,” much like a drama club, or hockey club, but it’s an organized high school activity, nonetheless. Each club has coaches, and some of the bigger schools even hold tryouts. Other states are following Illinois’ lead, so high school fishing will most likely continue to grow as a sport across the country.

The Values of Fishing

In addition to the core values of any sport like teamwork, trust and camaraderie, fishing clubs and their coaches offer so much more. They teach values that extend beyond competition. They involve an element of science, including biology and ecology. They teach conservation and respect for the environment.

“I try to instill values in the kids that extend beyond fishing,” said Coach Stan Tischer from Minooka High School. “I tell them, ‘Always leave the place better because you were there. It doesn’t mean just pick up the trash, it means be a good person.’ ”

Lastly, a huge difference from other conventional high school sports — fishing doesn’t end when high school is over. Sure, there may be some organized post-high school ball leagues. But fishing is a sport these kids will carry with them the rest of their lives. It’s something they can experience with their own kids someday, or possibly make a career of it. Fishing clubs will teach kids lessons they will be able to use throughout their lifetimes and pass on to the next generation.

Fishing clubs continue to spread to schools throughout Illinois and arguably add another facet to the “high school experience.” We all remember the different sports cliques – the football players, basketball and baseball players. Well now, fishing clubs give kids a chance to fit in and participate in something that is recognized and respected.

“Some of these kids have really come out of their shells,” explains Jim DaRosa, co-host with Don Dziedzina of the Fishing and Outdoor Radio Show.

“They are getting involved and forming a positive identity at a crucial time in their lives. Fishing gives a lot of kids that otherwise would not get involved, a chance to get involved and receive positive recognition from their peers. That’s an asset that is absolutely critical for high school kids today.”

Additionally, most schools require some commitment to community involvement, and tend to choose environmental tasks such as cleaning up lakes and shorelines as their community work project. As this trend continues, more and more Illinois high schools are forming teams, including Minooka, Plainfield, Joliet, Reed-Custer, Coal City and Providence, to name a few.

Just as the Illinois High School Association saw the value of fishing as a competitive sport by hosting sectional and state fishing tournaments, this concept is gaining traction from other industry professionals, but not just for the competition.

DaRosa and Dziedzina saw a need to recognize high school fishing programs that promote fishing as a lifelong activity and not only for the competitive angling.

“There are many high school fishing programs that have 40 -50 kids of all grades, with both men and women that teach all aspects of fishing. We wanted our radio show to be the vehicle that recognizes high school fishing programs that reinforce the learning aspect,” explains DaRosa. “Many in the fishing industry recognize that by creating a passion for the outdoors, environmental stewardship often begins with the love of fishing.

So they approached some representatives from one of the leading tackle manufacturers, Plano/Frabill, and told them they wanted to create the Team of the Year among high school fishing clubs that promote fishing in their schools and communities.

“They were ecstatic,” DaRosa said. “Their key decision makers were 100 percent behind it and decided to sponsor it.”

The weekly radio show dedicated 15 weeks toward this program, featuring one high school each week, including an on-air interview with the coaches. At the end of the year, the show would honor two teams as the High School Fishing Teams of the Year.

They didn’t just give accolades to the clubs that won, but wanted to recognize the high schools, kids and coaches that are true ambassadors of the sport of fishing. It’s not just about who catches more fish as it is about which teams are the most well-rounded, including community service.

“We have to recognize that the high school-aged angler represents the future of fishing,” Dziedzina said. “The Plano/Frabill Illinois High Schools Fish Here segment that we do on the Radio Show takes on the responsibility to recognize teen clubs who enjoy fishing competitively or just for fun.  We made it our goal to bring the resources to the young anglers of today so they can learn to enjoy the sport for the rest of their lives.”

And it’s clear industry support is growing, as other retailers come on board. But as the title sponsor, Plano/Frabill donates around $7,000 of fishing tackle and gear to these teams each year, and has probably donated more than $30,000 in fishing gear to various clubs since the program’s inception a few years ago.

It’s clear that with competitive fishing offered at the high school level, it will continue to grow as a sport. However, fishing as a school-sanctioned activity extends well past the competitive element — it fosters unparalleled values and engrains fishing as a lifelong skill and passion.

It’s great to see that more kids and parents are getting involved and recognized in one of the greatest outdoor activities on the planet.