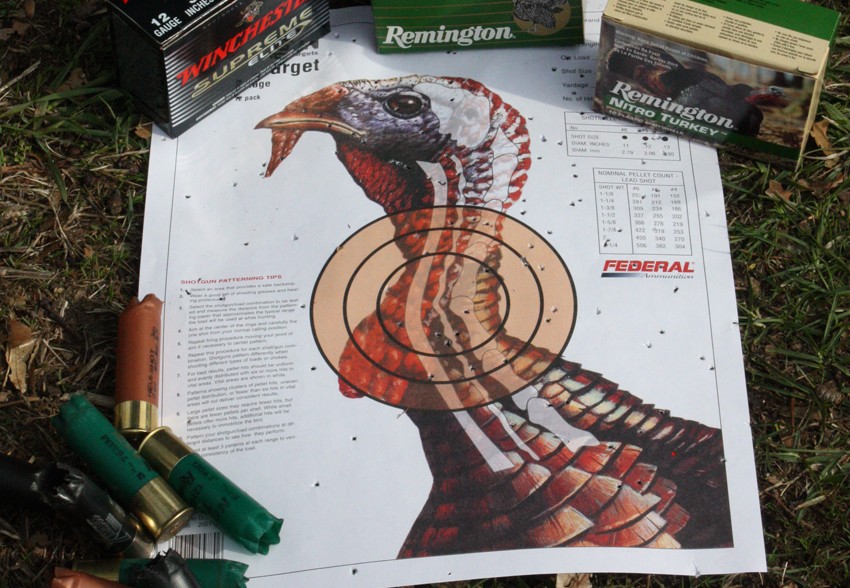 Wild turkey hunting has many challenges, as any seasoned turkey hunter knows. To add to the confusion of which gear to choose, where to hunt, or what choke to use on your shotgun, there is the dilemma of which ammunition will perform best. Any turkey hunter

knows that feeling while standing in the ammo aisle staring at the hundreds of options.  You might even ask a sales person at the gun shop, “What’s the best load to take a wild turkey.” Selecting the right load is one of the toughest choices you are going to have to make.

By field-testing some of the available loads on the market, I have some results to help narrow the options, and give my fellow turkey hunters one more advantage they could use to harvest Mr. Longbeard this spring.

The key factor to killing a turkey is fundamental as with taking any wild game. You need to put as many lethal pellets into the kill zone as possible. Notice I said, “lethal” pellets. While you may land some of the pellets in the head, it doesn’t necessarily mean you will kill it. Or you may have the pellet in the right place, but not have the velocity or energy to kill the bird. To make this happen, you need to make sure what kind of “pattern” your gun is shooting. The goal being a tight pattern, where most of the shot stays condensed, resulting in more pellets in the kill zone.

To identify the differences in shot patterns, I ran field tests with some of today’s best turkey loads. I test fired a variety of loads – lead versus copper plated and alloy (HeviShot) buffered loads, and duplex shot versus single shot size. Duplex loads contain a variety of shot sizes in the same shell. I used a duplex that contained #5, 6 and 7’s in one load.  The single shot size load is self explanatory, it’s a load that has all the same size shot.  #4, #5 or #6 shot size are the most commonly used in today’s turkey loads.

I test fired at ranges of 20, 35, and 50 yards using a Remington 870 Wingmaster pump with a 26” barrel and Super Full choke. The objective was to demonstrate the difference in the patterns at varying distances, and measure the number of lethal pellets.

As expected, copper plated and HeviShot loads performed much better than the lead, with more pellets in the kill zone at farther distances. The reason for this is simple. When shot travels down the barrel, it is actually compressed as it is forced into the tighter choke. Lead shot, when compressed under tremendous force, may become disfigured. So when it takes flight it will be more likely to stray off course rather than continue in a straight trajectory. Copper plated and alloy pellets are much harder, and when compressed are much less likely to change shape, ultimately flying straighter in a tighter pattern. Lead loads are also lighter and softer then copper or alloy, which means they will have less energy (or knock down power) at impact.

The results with varying shot sizes were also consistent. The duplex shot had more pellets in the kill zone than single shot loads, no matter what distance. But where they really demonstrate their value is at longer distances. See the chart that details the number of lethal pellets as various distances.

Also, when looking for the right load, make sure the box says the load is “buffered”, or loaded with fine granules called Grex. The granules act as a cushion to help keep the shot from becoming distorted, ultimately resulting in a tighter pattern. All of the shot loads used for this test were buffered, as are most turkey loads on the market today.

The basic rule of thumb is that you need to get 5-10 pellets in a turkey’s head for a kill shot. Another common rule is that 40 yards is about the maximum distance to take a comfortable lethal shot. With all loads used in this test, there were at least another 60-80% of pellets that landed in the head, and most likely would have resulted in a knock-down. However, a lethal kill shot should always be the goal.

Understand that the best approach is always to fire different rounds through your own gun to find out what load patterns the best. These tests that were performed are to serve as a guideline to help you figure out the best load to use by taking some of the guesswork out of it. By knowing what load you shoot best, you will have the confidence in your weapon as well as knowing your lethal killing range. And that can make the difference between going home with a bird or stopping at the supermarket for a Butterball.