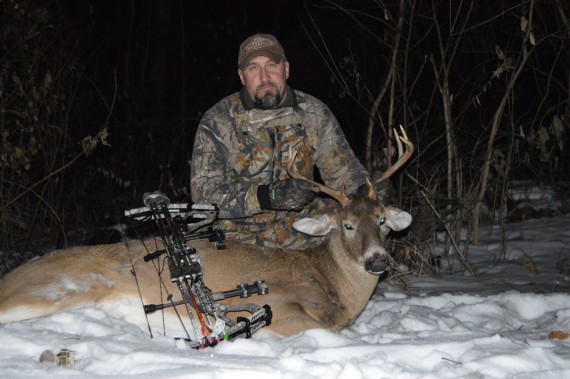 2014 was a tough deer season. Not because deer numbers were supposedly down. Things just weren’t going my way. A bad shot on a buck during bow season, and some good old “wrong place at the wrong time” kept me from scoring. Nonetheless, I was determined to put some venison in the freezer. On January 1st, I finally put a doe down, ending my potentially “skunked” season. But hunting deer in January late in the season, I learned a few things.

When I had the opportunity to hunt the last three days of the season with a couple buddies, I jumped at the chance. With tags to fill, Rick Drapak, Jerry Bush and I were bringing our A-game. When we arrived on the property in Western Illinois, the snow covering the food plot looked like an army had marched through it. Not one square foot of snow didn’t have a hoof print in it. We figured this was going to be shooting fish in a barrel. So we thought.

The first morning was a bowhunters dream. Cold and crisp. Fresh snow on the ground with no wind had us stoked. But no deer. In fact, only a few deer were spotted, none of them in range. That afternoon, I watched two bucks amble by. Holding an antlerless tag in my pocket, I had to let them walk. But their luck didn’t last, as they headed toward the food plot where Rick was on stand. A perfect 41-yard shot smoked the 8-pointer, who staggered 20 yards and piled up in sight, which was good since he left absolutely no blood trail. Those were the only 2 deer that (almost) showed up to the food plot that had been overrun the day before.

Figuring the deer had moved to the south, Jerry pointed me to a spot where several fingers of land (between frozen sloughs) converged forming the “crossroads”, and he set up several hundred more yards to the south. Not long after first light, I drilled a buck that had shed it’s antlers. With a spine shot, the buck didn’t go far, and left no blood trail. The next morning was the last day of the 2014-15 deer season. Rick and Jerry each took a doe before the sun had cleared the horizon, filling their tags.

Four deer down in three days was the end result, but it certainly wasn’t as easy as we thought. We had to change our plans and work hard for them. Here are a few lessons that we all learned that weekend…

1. When even slightly pressured, deer will change their patterns, fast. After one afternoon and a morning hunt over the food plot, the deer quickly moved from that area. Thinking like the deer, knowing the terrain and changing our position helped us score.

2. All of the deer we shot left little or no blood trail. By the third week of January, deer hair is extremely thick. Long hair and a layer of subcutaneous fat kept the wounds from allowing blood to escape, even with an exit wound. Fortunately, snow makes it easier to track. But that’s also why it’s important to watch the deer as long as you can after the shot— to know it’s last direction of travel, increasing your chances of recovery. You can’t rely on a heavy blood trail.

3. Keep your presence unknown. Deer aren’t stupid. Just like you know when someone is in your house, deer know when you’re in their woods. By not firing

up the wood-burning stove or the generator, we tried to keep our presence in their “house” to a minimum. We also did NOT use flashlights when entering and leaving our stands. These simple tactics definitely helped us put four deer on the ground.

This year I spent more time than ever hunting in January, and I was fortunate to put meat in the freezer. It was an incredible hunt with good friends. I’ve been deer hunting for 35 plus years, and have learned a lot along the way. But this weekend, I found out you’re never too old to learn something new. Try to take something away from every hunt and every experience. See you next season!