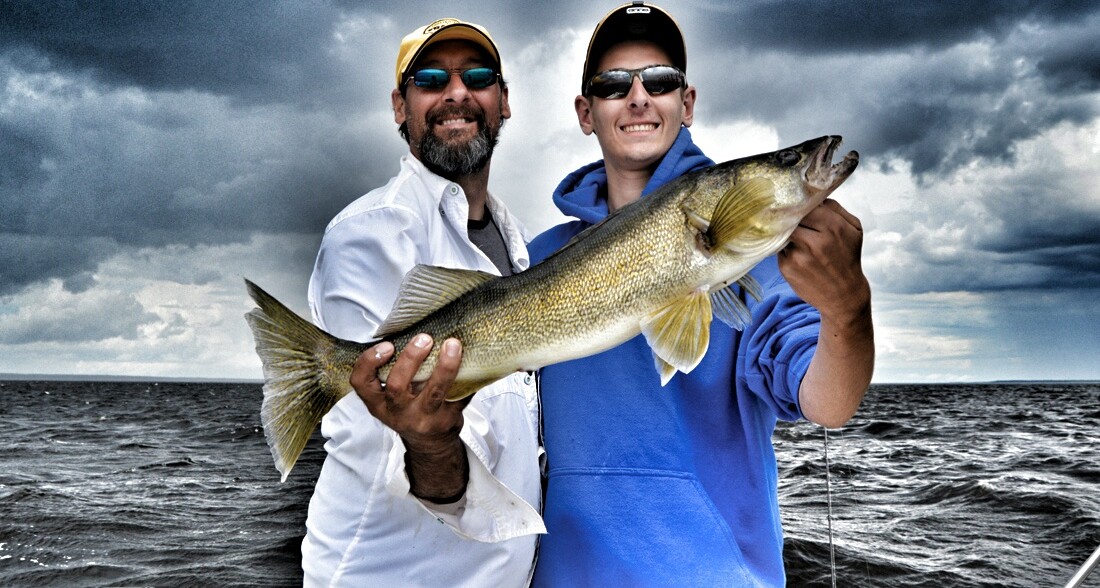 I have a problem, an addiction really. It’s grown worse over the years, and I fear I’m out of control. My name is Dan and I’m a walleye addict. This is my story.

Early Signs of Addiction
The year was 1983. My first trip to the boundary waters of Minnesota provided me with my first encounter with the marble-eyed fish known as the walleye. Little did I know it was an experience that fostered a passion that would culminate with an addiction to catching them. For years, work and kids made life busy. I would catch a few here and there. However, my desire to pursue walleye was like a bear, hibernating. Then a trip with some buddies to Lake St. Joseph in

Ontario resurrected the passion. Vertical jigging steep drop-offs for dark gold Canadian walleye, and the shore lunches that ensued, only added to my desire to catch more of these delicious critters.

In 2009, I was co-hosting the Fishing and Outdoor Radio Show. Each fall we sponsored a trip for fans and friends of the show for a 4-day group fishing trip to Mille Lacs Lake in Minnesota. It was there I fished with Tim Ajax, one of the top walleye guides on that lake, and boated a 9-pound walleye. It looked like it had swallowed a football. I think my mouth was still open as I slid the behemoth back into the lake to make more of these beautiful things. With rough scales, spiny dorsal fin, razor-edge gill plate, and needle-like teeth the walleye is an apex predator, and a hardy one. It’s constantly moving to eat which makes it a challenging quarry, but only adds to my infatuation. The annual Radio Show trip continued for several years, and I fished with Ajax every time and proceeded to land some amazing fish, many of them over 25 inches. There were plenty of other species to catch on Mille Lacs and the surrounding lakes, but there was only one fish I cared about. It was at that point the passion started to turn to obsession.

A Junkie is Born
In 2012, I met Joe Henry, the Executive Director of the Lake of the Woods, Minnesota Tourism Bureau. If I had to say my addiction had an enabler, it was Joe.

He invited me and my two sons up for a few days to to fish at the “Walleye Capital of the World”.  I would soon find out how right he was. My boys and I proceeded to boat over 130 walleyes in three days fishing out of Sportsmans Lodges. We fished all areas of the lake, the Basin, the Northwest Angle and the Rainy River. And the variety of tactics we used to catch them were equally diverse— drifting crawler harnesses, vertical jigging and trolling. We parted ways and put Lake of the Woods in our rearview mirror. But it was too late, I was hooked.

Upon returning home, I did some panfishing and caught a few bass. But the toothy, hazy-eyed fish still swam in my head. When my fishing partner Jerry Bush and I turned our attention to local fisheries, there was only one fish in our sights. Jerry proceeded to sniff out the honey holes, nail down the bite, and bring me in for the kill. While local rivers flooded with record setting rainfalls, we crushed the walleye in cooling-turned-Mother-Nature Lakes. 25, 26, 27-inchers filled our landing nets. We took a few home for the frying pan, and put the big mamas back to make more. When the rivers dropped to prime conditions, we dove in head first and started spanking the Kankakee River, another incredible Illinois walleye factory.  When current and river conditions were right, we would conspire at night and launch the boat in the dark at 5 am. I would have my limit and still make it to work before anyone else. It was then I hit bottom and admitted I had a problem. I had become a walleye addict.

Head East, Young Men
I couldn’t get enough. Since addiction may be hereditary, I feared my kids may become affected as well. My two teenagers, starting to exhibit classic symptoms, began to bug me to plan another walleye trip. So we called Turbo and Beth Mol from Dunlaps Charter Service on the Western Basin of Lake Erie. They rolled out the red carpet and hosted us for an incredible trip. as we caught some gorgeous toothy critters on yet another body of water. It was there I learned how delicious the walleye cheeks are as an appetizer, which only deepened my addiction. By September, my fix had been satisfied, and it was time to don camouflage and start the quest for venison. Walleye would have to wait.

Back to the North
I had another chance to put some walters in the frying pan, but this time through the ice. I again headed north to Lake of the Woods in February to pull my favorite fish on a frozen ice-scape which was just another incredible experience. Then, this past spring I was invited to Mercer, Wisconsin for a media event with the Association of Great Lakes Outdoor Writers. When I arrived, I was greeted by one of our hosts, Tina Brunell from the Mercer Chamber of Commerce. As we discussed the upcoming agenda, I tried to keep calm and without shaking muttered “I really need to catch a walleye.” She obliged. Although I don’t think she realized she was enabling my addiction. But it didn’t matter, I boated more golden greatness from Northern waters.

I’m home now, and I’m told to take it one day at a time. Each day is a struggle, fighting the urge to hitch the boat and head to the lake rather than the office. I

still slip. And when I do, I tell people it’s “Bring Your Boat to Work Day”.  I feel good, but deep down I know there is something wrong with me. I don’t consider any other fish worthy of pursuit. The walleye pros are my sports heroes. And I dream of pulling in 12-pound walleye on the Detroit River — only to wake up in a cold sweat.

They say misery loves company. So if anyone is suffering this addiction, or is exhibiting this kind of thinking or bizarre behavior, we should probably get together and talk about it. Just be sure to bring your favorite walleye rod and I’ll meet you on the boat ramp.